When considering a material for a gear design, the most significant decision is the ease of machinability vs. the durability of the material. Most designers only look at the maximum bending strength when choosing a material. However, this only addresses the shear failure of the gear. More important to the longevity of a gear system is the surface durability of the material. The surface durability of a gear should be viewed from the perspective of the life of the gear. Surface durability determines the number of cycles a gear, under a certain load, with proper lubrication and minimized vibrations, can remain operational. If the load is exceeded, then the life will be reduced. If the lubricant is not properly maintained, the life will be reduced. Surface durability typically affects the gear in the system with the fewest number of teeth as this gear is more frequently engaged than others. In order to increase the surface durability, an appropriate heat-treatment process should be applied in order to extend the life of this gear.

Heat treatment is a process that controls the heating and cooling of a material, which is performed to obtain the required structural properties of metals. Heating methods include normalizing, annealing, quenching, tempering, and surface hardening.

Heat treating is performed to enhance the properties of the steel, as the hardness of the material increases when applying successive heat treatments. This results in the gear strength increasing along with it because the tooth surface strength increases drastically. As shown in Table 1, heat treatments differ depending on the quantity of carbon (C) contained in the steel. 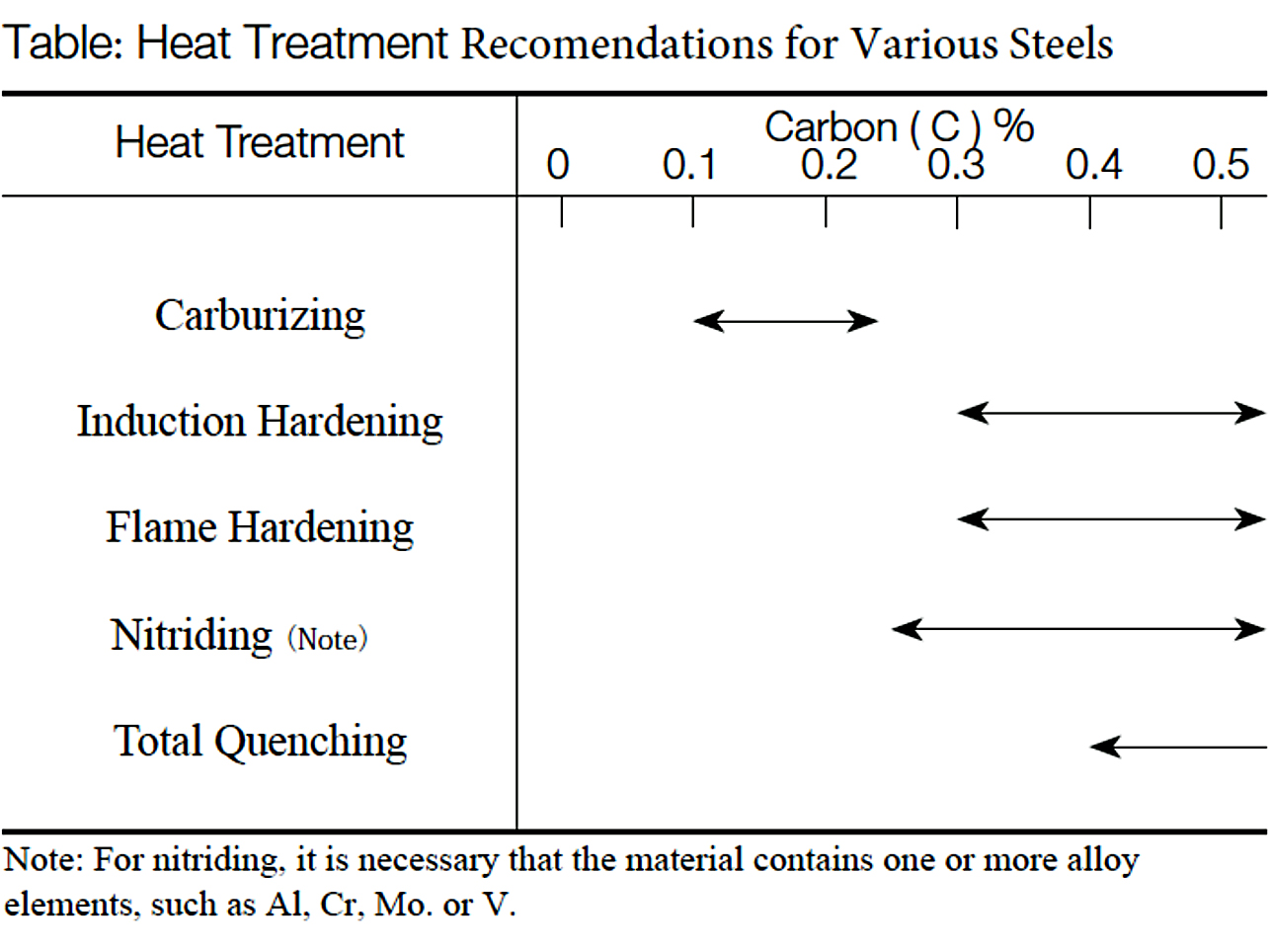 Table 1
The following are some of the various methods of heat-treating steel:

Normalizing is a heat-treatment process applied to the microstructure of the small crystals of steel to unify their overall structure. This treatment is performed to relieve internal stresses or to resolve inconsistent ﬁber structure which developed during the forming process.

Annealing is a heat-treatment process applied to soften steel, to adjust crystalline structure, to relieve internal stress, and to modify the material for cold-working and cutting performance. There are several types of annealing in accordance with the application, such as full annealing, softening, stress relieving, straightening annealing, and intermediate annealing.

Thermal Reﬁning is a heat-treatment process applied to adjust the hardness, strength, and toughness of steel. This treatment involves quenching and high-temperature tempering, in combination. After thermal reﬁning is performed, the hardness is adjusted by these treatments to increase the metal’s machinable properties.

The target hardness for thermal reﬁning:

JIS S45C/AISI 1045 (Carbon Steel for Machine Structural Use) 200 – 270 HB
JIS SCM440/AISI 4140 (Alloy Steel for Machine Structural Use) 230 – 270 HB
Carburizing is a heat-treatment process performed specifically to harden the surface of a material in which carbon is present and penetrates the surface. The surface of low-carbon steel can be carburized (subjected to carbon penetration under heat and pressure) and results in a layer of high carbon on the outer surface. This process requires quenching. Low-temperature tempering is applied after quenching to adjust the hardness. Not only the surface, but the inner material structure is also somewhat hardened to some level due to the carburizing, however, it is not as hard as the surface. If a masking agent is applied on a part of the surface, carbon penetration is prevented, and the hardness is not changed. The target hardness on the surface and the hardened depth are:

Quench Hardness 55 – 63 HRC
Effective Hardened Depth 0.3 – 1.2 mm
Gears are deformed by carburizing, and the precision grade of the gear is always decreased due to this process. It is recommended that gear grinding is performed to the teeth, and other critical surfaces after carburization in order to improve precision.

Induction Hardening is a heat-treatment process performed to harden the surface of the gear by induction-heating steel with a minimum composition of 0.3 percent carbon. In this process, an induction coil is place around the gear and a current is passed through the coil. This electrical current heats the steel quickly, followed by quenching. For gear products, induction hardening is effective for hardening tooth areas including tooth surface and the tip, however, the root may not be hardened in some cases. Generally, the precision of a gear declines from the deformations caused by induction hardening. When induction hardening S45C gears, the effective hardness and depths are:

Quench Hardness 45 – 55 HRC
Effective Hardened Depth 1–2 mm
Flame Hardening is another surface-hardening treatment which is performed by applying a ﬂame directly to the steel. This treatment is usually performed on the surface for partial hardening as it is difficult to maintain the proper heat level and duration in order to achieve a uniform hardness across a wide portion of the gears.

Nitriding is a heat-treatment process performed to harden a gear by introducing nitrogen into the surface of steel. If a steel alloy includes aluminum, chrome, and molybdenum, it improves nitriding and the desired hardness can be obtained. This is a heat treatment in which the entire steel material is heated to the core, and then cooled rapidly afterwards, where not only is the surface hardened, but the core is also hardened.

Laser hardening is a relatively new surface heat-treating process. The material is subjected to a 4kW laser with a 40mm mrad beam. This process is able to achieve a hardness of 55-65 HRC at a depth of 0.3-0.8 mm. One advantage of laser treatment is that the bending strength remains unchanged, unlike induction hardening which reduces the bending strength on average 10 percent. Laser treatment is able to increase the surface durability 2.2x, whereas induction hardening increases 2.5-2.6x. Due to the short duration of the applied heat and the lack of a need for quenching, this method minimizes distortion. In a side by side comparison, a rack of one meter in length had an increase in length of 0.233mm when induction hardened. However, the same rack increased only 0.019mm in length when laser hardened.

Each of these heat-treating methods has its place in developing a surface hardness suitable for the material selected and the design life of the application. The material selection, cost, and secondary operations will be your guide to the appropriate choice.

Was this article helpful to you? Yes No

How can we help?

Dongguan Songshun Mould Steel Co., Ltd. is located in Chang’an Town – the famous town of mold in Pearl River Delta of China. After 10 years’ development, now we have the capacity to provide complete services from manufacturing and marketing to distributing.